Links to my other sites

Maybe you had to be there. Or better not. It wasn’t funny at the time.

Remember the “Mystery Chicken”? Well, that year’s mystery chick turned into a snow white hen. My only snow white hen. Now I don’t know if chickens see color, but they seem to favor their own kind (I noticed, same colors stick together – how so very politically incorrect!) So Miss Lilly-White was sort of an outcast.

I have to go back a little in time, to explain the ever evolving Fort Knox of chicken coops.

There was a time when it still rained in Arizona, and we were not yet overrun by new residents who plaster the countryside with acres of housing cubicles. So wild life was still living in the wild, not pushed to live close to people. I didn’t see a raccoon at my place until about 4 years ago.

Hence, my retirement coop was not too well fortified. It had a 5 foot fence and it was open to the sky. The coop is about 15 by 15 feet with one side being the fence between the chickens and the dogs.

Now in the dog run right next to the chicken coop stands a large Pine. Miss Lilly-White discovered that it made a great place to sleep. Since I lock my dogs in after dark to avoid close encounters of the Skunk variety, the chicken in the tree was no problem. She loaded up into the tree at last light and came down at first dawn. I would stick my head out the back door, check that the chicken was no longer in the tree and then open the dog door.

Same routine every morning, ditto on this fateful day.

The last thing I do before departing for work is to take a turn around the back yard, checking that everything is the ways it should be. Passing the retirement coop I noticed the lack of my glaringly white chicken. I looked up in the tree, no chicken. OK, if she can fly into a tree, she can also sail out off the tree and off over the fence. She could be doing a walk-about on the back 40. I checked all over, no chicken.

Did I ever mention that I see things. Like things that are about to happen before they do. OK, that sounds loony, but I have on a few occasions in my life seen something happen 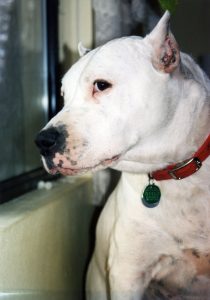 just shortly before they did. Not always, thankfully.

I checked the back yard for Miss Lilly, and suddenly I remembered seeing my dog Blanca, when I passed her on the way out, and she had looked positively ANGELIC. The picture of innocence! If you knew Blanca, you would also know that neither of the aforementioned qualities are part of her makeup. And at that moment I had a clear vision: the chicken on my bed!

I raced into the house, ran into the bedroom, and there atop my day cover was Blanca, happily de-feathering the chicken.

Oh boy! That chicken was sure a gonner, but I couldn’t leave the place like that, I needed to clean up before going to work. And besides, it would get real gross in a minute! I picked up the phone trying to compose a sentence that will make sense to a non-chicken-owning colleague. Something about some urgent maintenance chore or some such. What I blurted out was “I’ll be late, there’s a chicken in my bed.”

That having been cleared up, I took the chicken away from a very unhappy Blanca, shortly raising Rocky’s hopes that I might plan to give it to him, and headed down the hall, strewing feathers in my wake, to the cabinet where I keep my trash bags. Of course trash bags at my house come in the convenient roll of about 2000, which makes pealing off the first 500 or so a two-handed job. Giving the dogs a stern warning to not even dream about touching the bird, I put Miss Lilly on the floor, so to wrestle off a trash bag from the roll. And guess what!? She was not dead after all. With an ear spitting “gaaag” she took wing, well sort of without feathers, and proceeded to race down the hall, two dogs and me in hot pursuit.

To end the story, I won the chicken race and the job to kill her. I got the job to remove four zillion feathers from the bedroom and my bedspread. Miss Lilly got the three-trash-can-lid-salute, and I felt my usual wretched self, for not having been a better protector of an animal put in my charge.

So of course time having passed, and all wounds having healed, and being someone who adores situational humor, I feel – this story needed telling.